Posted on September 12, 2018 by lavenderhillforme

Back in May we reported that the Co-op was quietly exploring the possibility of a new mini supermarket on Lavender Hill – and that the chosen spot was one that had previously been a Co-op until the 1980s.  These plans are now confirmed, with a planning application in for changes to the shopfronts (2018/4340), another for new shop signs, and a new licensing application for alcohol sales.

The main site is the old Ichnusa gastropub (47-49 Lavender Hill) – but the project will also take over the old long-abandoned Ace Printing print shop next door (No. 51), which will mainly contain the back of house parts of the shop (freezers, deliveries, office, bakery, etc).

The terrace at the front will be replaced by ramps and steps to ensure easy access & provide cycle parking, and the whole shopfront will be generally tidied up, to include electric doors but also to make it more in keeping with the appearance of the rest of the building.  Unusually for a new Co-op there’s no plan to install a cash machine – presumably reflecting the rapid move from cash to contactless card payments.

Some work has already started to strip out the fittings in the old gastropub and former print shop, as our photo below shows.  An impressive number of fridges were removed (at least seven), as well as enough furniture to fill the unit next door from floor to ceiling. 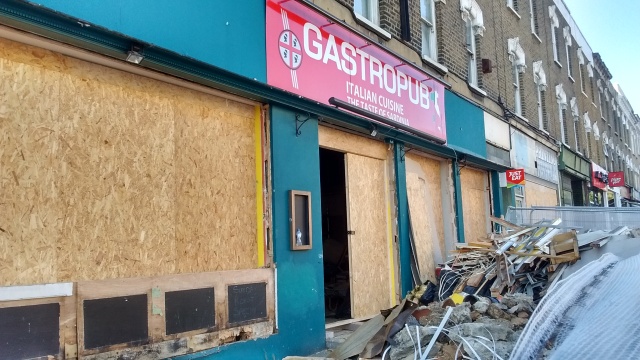 Bringing these units back in to productive use can only really be a good thing for Lavender Hill as a whole, and we doubt this development will be controversial.  There may be concerns in Marmion Mews about a proposed new air conditioning unit at the rear, though these tend to get through planning without much difficulty as long as the applicants install a suitably quiet design.  The Co-op reckon this new store will create 20-25 jobs (some of which are part time).

We understand the shop next door at No. 53 Lavender Hill is owned by the same landlord, but it’s not part of this proposal.  Despite an elegant Victorian shopfront No. 53 has been unoccupied for longer than any other shop on Lavender Hill – hopefully there are separate plans to somehow get it back in to use (potentially also making some use of the basements that extend under all four of these units, which are not part of the supermarket plans).

This entry was posted in Uncategorized. Bookmark the permalink.