Posted on August 13, 2019 by lavenderhillforme

A while back we reported that Wandsworth Council is planning to start work on the building of 26 flats and 4 large houses, spread across seven different buildings mostly on “spare” bits of land in the Gideon Road Estate.  These are all set to be Council-owned, and are mainly designed to accommodate long-term tenants who are being moved out of the Winstanley Estate ahead of its partial demolition and redevelopment.

Work has now started on the first four blocks – the whole site has been fenced off and cleared.  All the old lock-up garages have been demolished, and what looks like the beginning of a new drainage and sewerage network is being installed. 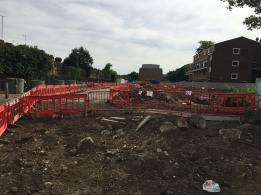 The car park area as it was (image © Google Street View), and as it is now…

It’s good to see the Council investing in what (at least from the plans) looks like decent quality and spacious housing (many of the flats and houses have gardens), though as ever we’ll only really know how well built these are when they’re finished!

Ultimately we’ll see a mix of houses and flats (architects’ impression of what it will look like below), and a reorganised (and smaller) open-air parking area.

According to the plans that were submitted for approval, three further small blocks are set to be built further to the east (one of them in the sunken car park area behind The Crown pub).

Inevitably, access routes are likely to be a little constrained for the next few months – as this map shows, the only way through is to squeeze around the edge of the building site.

When the development is complete, the layout will be a bit more logical than what was there before, though the layout of new buildings at the western end of the site means there will be a blind corner and a rather narrow exit route through to Grayshott Road that’ll probably be best avoided after dark.

This entry was posted in Environment, Housing, Planning. Bookmark the permalink.